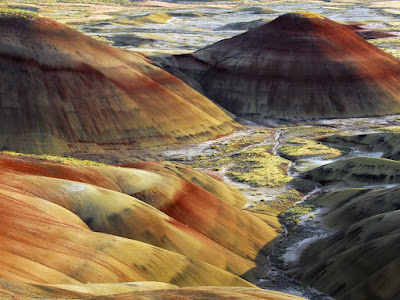 Hills & Mountains
Your protagonist finds themselves hiking up a hill, or is it a mountain. What features will it have and can one word describe the features without a long description?

To help in setting up your novel, or just out of curiosity, read on and discover more about hills (or is it a mountain?)

According to the U.S. Geological Survey, there is no official difference between hills and mountains. The United Kingdom and the United States used to define them; however, both countries abandoned the distinction in the mid-twentieth century.

Hills may form through geomorphic phenomena: faulting, erosion of larger landforms, such as mountains and movement and deposition of sediment by glaciers (e.g. moraines and drumlins or by erosion exposing solid rock which then weathers down into a hill.) The rounded peaks of hills results from the diffusive movement of soil and regolith covering the hill, a process known as downhill creep.

The Himalayas in Asia, the tallest mountain range in the world, were once tiny hills. The Himalayas continue to grow because of faulting activity beneath the Earth’s surface.

Mound or Tumulus
Sometimes, you'll find a hill made by people. This is called a mound—area of raised earth above a grave or graves. In the Midwest region of North America, a network of Native Americans known as the Hopewell created huge mounds. In fact, the Hopewell people are often called Mound Builders. The most well-known mounds are in Hopewell Culture National Historical Park, in the U.S. state of Ohio. Artificial hills may be referred to by a variety of technical names, including mound and tumulus.

Hillock
A hillock is a small hill. Other words include knoll and (in Scotland, Northern Ireland and northern England) its variant, knowe.

Drumlin Hill
A drumlin is a long hill, an elongated whale-shape hill, formed by the movement of glaciers. Also, during the Ice Age, glaciers covered the area, mowing down the landscape as they advanced like steamrollers; removing all the hills. The glaciers started to melt and running water from the melting glaciers helped form the hilly, rugged landscape further south.

Butte or Mesa
A butte or mesa  are isolated hill with steep sides and a small flat top, formed by weathering

Tor
A tor is a rock formation on top of a hill. Sometimes, especially in the United Kingdom, a tor also refers to the hill itself.

Puy
A puy is a description used especially in the Auvergne, France, to describe a conical volcanic hill.

Pingo
A pingo is a mound of ice covered with earth. These are found in the Arctic and Antarctica.

Kuppe
A Kuppe is a rounded hill or low mountain, typical of central Europe

Plateau
A plateau is a flat topped highland with steep sides. Plateaus are formed when magma pushes up towards the surface of the earth’s crust. This magma does not break through but it raises a portion of the crust up creating a plateau. There are certain kinds of plateaus like the butte and the mesa. These are special kinds of plateaus.

Tels
In ancient times, when one civilization conquered another the invaders would tear down an old city and just build their new city on top of the ruins. After hundreds of years of such processes, the result was a hill made of layer upon layer of old city debris. Thousands of these hills, called tels, can be found in the Middle East.

Isthmus
An isthmus is a narrow stretch of land which joins to large land masses—Example the Isthmus of Panama.

Do you know of any others? Please add to the comments below.
Posted by Unknown at 2:59 PM

Email ThisBlogThis!Share to TwitterShare to FacebookShare to Pinterest
Labels: Landscape your Novel, Writing