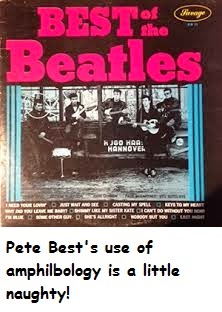 This week my amazing word is:

Amphibology represents a sentence or phrase that can be interpreted in more than one way. A phrase with more than one meaning can be risqué, as in the classic 'double entendre'.


Amphibology is consequently found in much deliberate humor, where the flexibility of the language is played to delightful effect. It is a close relative of Ambiguous.

Examples
A newly married man asks his wife, "Would you have married me if my father hadn't left me a fortune?"

"Honey," his wife replied, "I'd have married you no matter who left you that fortune."

A doctor said to his patient, "I can't find the cause of your illness,"
then paused thoughtfully and added, "but frankly I think it's due to drinking."

"That's OK," replied the patient, "I'll come back when you're sober."

Other Examples
March Planned for Next August

Patient at Death's Door--Doctors Pull Him Through

Killer Sentenced to Die for Second Time in Ten Years

Autos Killing 110 a Day--Let's Resolve to Do Better