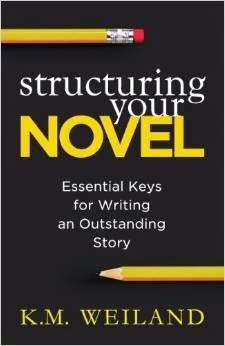 Have you ever wondered why we enjoy movies so much?

How directors structure movies to keep you interested in the buildup and then, how they speed up the action or increase the emotional connection at just the right moment?

It is all in the structure, a formula for film and books which has been around for hundreds of years. In her book K.M. Weiland reveals the secrets behind the best movies and books.

The author K.M. Weiland writes with a relaxed, friendly style which makes you feel comfortable; a favorite lecturer from University. (Check out her blog.)

Her examples are from both literature and movies; Pride and prejudice, It’s a Wonderful Life, Enders game, and master and Commander. The reason for the mix is the way films tend to stick more rigidly to the structure she is discussing and so you can see it in action more readily.

In a whirlwind of information she walks you through the three acts of every story, Scene (with a capital S) made up of scene and sequel, and leaves you with sentence M_R units.

Below, I have listed out the key information in structuring, be it in the movies you watch or in writing your novel, which K.M. Weiland discusses. I’d strongly recommend getting the book, even if you only read novels or watch movies, it is interesting to understand the science behind the art.

The structure of movies & Novels:

The Hook—the great first line to reel those readers in or the opening scene in the movie.

The First Act: Introducing Characters and Stakes & Settings (at the 0%-25% mark)—the setup of the story.

The First Plot Point 25% mark—inciting Incident and point of no return for the protagonist.

First Pinch Point—the antagonist flexes their muscles and the protagonist sees the power they face.

Midpoint (50%)—the point the protagonist stops their reacting and starts their acting.

Second Pinch Point—the antagonist reasserts their power and knocks the protagonist back, this is where we know we are in for a big fight.

The Third Plot Point—low point for the protagonist, just when it all seems desperate.

Climax—the collision in the final scene and the protagonist wins (usually.)

The Resolution—we see how the characters begin to move on.

K.M. Weiland’s book is an easy and educational read and I’d give it 5 stars out of 5!

Buy it at Amazon: Structuring Your Novel by K.M. Weiland

I am going to devote a separate blog to these three subjects.