How Cannibalism Can Fix a Migraine 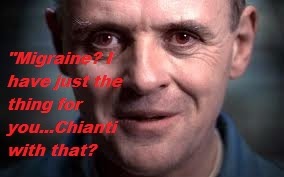 I am back after a two week siesta brought about by a severe migraine followed by a bout of malaise topped off with writer’s block.

My migraine led to me being unable to use my laptop\phone\iPad for three days. Now, some of you might be throwing your hands in the air in horror at such a thought, no technology, but this was not like I had them taken away and I sat in the corner rubbing my bald head repeatedly saying “precious”. Those of you who have suffered migraine will know the technology was irrelevant—along with pretty much everything else in one’s life.

After hiding in the dark, slowly making my way out behind sun glasses all the way to the malaise which often follows one of this attacks, I eventually made it back to the real world. I headed out of the tunnel straight into a strickening bout of writers block.

All this made me think of how I might better manage migraines in the future.

Modern medicine offers medication with differing levels of power from the over the counter to the all-powerful wizard of morphine (I resisted the urge to take one from my Crohn’s supply.) Once I could bare the view of my computer screen, I looked into cures from the ancient world and came up with some doozies.

1. Ancient Egypt—Nice bit of fried fish
Anoint the head with the skull of a cat-fish fried in oil.

I tried it with my cat…didn’t work.

2. 17th Century England—Nice bit of raw peasant (peasant not pheasant)
The type of cure prescribed usually corresponded to the type of ailment—skull was used for migraines, and human fat for muscle aches—but getting fresh stock could be a gruesome process. In some cases, the sickly would even attend executions in the hope of getting a cheap cup of the freshly killed person’s blood.

Is that red or white meat?

3. Ancient Greece—Mint Tea
The term ‘migraine’ derives from the ancient Greek term hemikrania, which comes from the Greek words ‘hemi’ and ‘crania’ for ‘half’ and ‘skull’. Interestingly, the word chronic also derives from ancient Greek mythology, in the name ‘chronos’, which means time. The earliest descriptions of a rare form of migraines called Basilar-type migraine also come from Aretaeus in ancient Greece.

I’m just glad we are moving away from the whole skull theme.

4. 11th Century Spain—Garlic, no not orally
Here you take garlic, peel and cut it at the two ends, make an incision at the temples with a large scalpel and make space underneath the skin enough to completely hide the garlic.

I rubbed garlic toast into my temples but obviously peeling the skin back is an important part of the process.

5. Ancient Rome—Goose Feathers up the nose
One takes the shaft of a thick goose feather, scrape off a bit from the outer layer and make notches into the fibres so that it results in teeth like on a saw. Subsequently, push the shaft inside the nose up to the ethmoid bones, move it with both hands in order to create scratches at that site. In this way, a lot of blood will be discharged in a short time, as many small veins end there, and the site is soft and easy to injure’

Oh my god…I’ll keep the headache.

“Consequently, you have to shave off the hair (which yet on its own is good for the head) and cauterize superficially down to the muscles. If you wish to cauterize down to the bone, carry it out at a site where there are no muscles. For if you burn muscles, you will provoke cramps. Some physicians incise down to the bone on the forehead along the border of the hair. They abrade or chisel the bone down to the diploe and let flesh grow over the place. Others perforate the bone down to the meninges. These are hazardous treatments. You have to apply them when the headache persists after all that has been done; the patient keeps courage and the body is vigorous”