Charles Hebdo: What of Qisas? 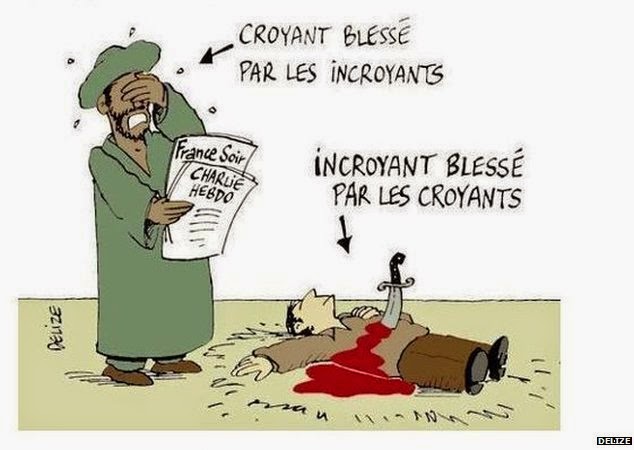 For me, this cartoon speaks most deeply.


By the French artist Delize.


The Charles Hebdo attack is a disgusting act of retribution, but what of Qisas [Islam law of retaliation], where punishment means causing injury to the offender similar to the injury caused to the victim.

The Quran itself says the punishment should not only match the crime but the as similar to the crime as possible.

We ordained therein for them: "Life for life, eye for eye, nose for nose, ear for ear, tooth for tooth, and wounds equal for equal." But if any one remits the retaliation by way of charity, it is an act of atonement for himself. And if any fail to judge by (the light of) what Allah hath revealed, they are (No better than) wrong-doers.
— Quran 5:45

With reference to the Qisas the Quran aslo says:

After this whoever exceeds the limits shall be in grave penalty.
— Quran 2:178

If the words of Charles Hebdo hurt and offended then does not true Islam, taught by Mohammad, demand an equal response?