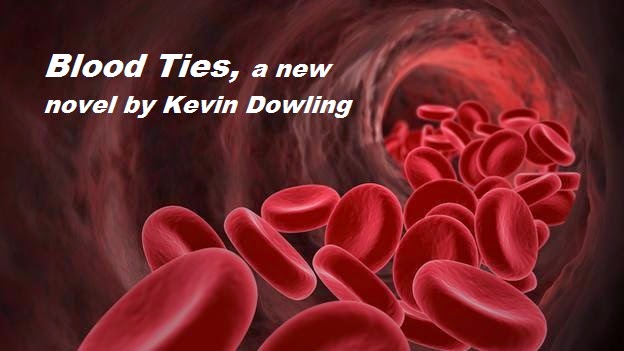 I argue that so do novelists.

In my novel Blood Ties my protagonists battle with moral dilemma of the youth giving properties of blood.

This same discussion takes place in the latest issue of Nature magazine, where they run an article called, Aging Research: Blood to Blood.

“By splicing animals together, scientists have shown that young blood rejuvenates old tissues. Now, they are testing whether it works for humans.”

Of Mice and Men’s Blood

Like Blood Ties, the article talks about how two mice were grafted together so they shared the same blood circularly system, twenty four hours a day. This same type of experiment is presented to the protagonists in Blood Ties as they make their decision. See the illustration below, Share and share a like (1). 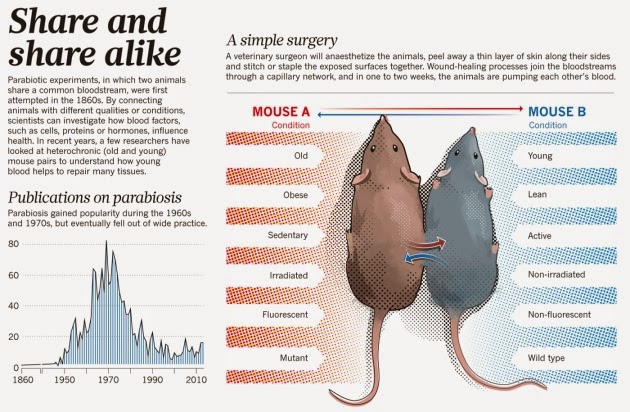 Parabiosis is not new

Parabiosis is a 150-year-old surgical technique that unites the vasculature of two living animals. (The word comes from the Greek para, meaning 'alongside', and bios, meaning 'life'.) It mimics natural instances of shared blood supply, such as in conjoined twins or animals that share a placenta in the womb (2).

In the first experiment, in 1863, Paul Bert simply removed strips of skin from two rats and stitched the animals together and biology did the rest, joining the two systems. Liquid injected into one rat traveled through to the other.

In Blood Ties this same side effect leads to unexpected complications.

Parabiosis has been applied to the research of aging, with one and half month old rat being attached to sixteen month old rat, with some amazing out comes.  The older partner lived for four to five months longer (this translates to fifteen to twenty years in humans) than controls, suggesting for the first time that circulation of young blood might affect longevity.

Tony Wyss-Coray’s, a neurologist at Stanford University in California, research, published last May, caught the attention of a company in Hong Kong owned by a family with a history of Alzheimer's disease.

The article goes on to say:

Young blood seems to turn back the effects of ageing, potentially with few known safety concerns in humans and, so far, with corroborated results from parabiotic ageing studies in multiple labs.

But scientists and ethicists still worry about the treatment being tried in people outside approved clinical trials before evidence on its safety and effectiveness is in. Unlicensed stem-cell transplants are already a booming industry, warns Mattson, and unlicensed transfusion of young blood would be even easier.(2)