Amazing Words: Do you know who first coined the word Yahoo? 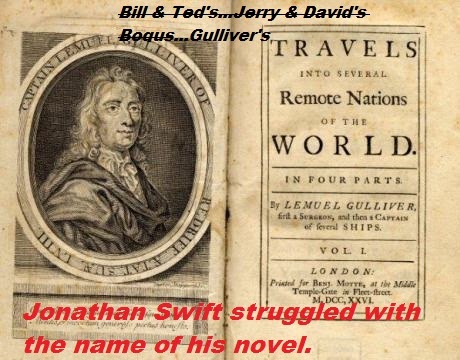 Each week, I’m going to present an amazing word. This week I will present FOUR.

Introducing the amazing Jonathan Swift at the ripe old age of 347.

Jonathan Swift’s Gulliver’s Travels is one of the better known works of the 18th Century and one of the earliest examples of science fiction.

In particular, the floating island of Laputa, which is dripping in symbolism depicting the English rule over the Irish at the time—Jonathan Swift was a High Church Anglican and Dean of St Patrick's Cathedral in Dublin. Laputa, which is Spanish for the whore, represented England.

Gulliver’s Travels is an amazing book for a number of reasons, but I will focus here on a couple of the amazing words Swift made up in his book that are now used in the English language. Then I will introduce a couple of very "modern" words first coined by Mr. Swift.


This week my FIRST amazing word is:

In Gulliver’s travels, Gulliver comes upon a land between Japan and North America which is six thousand miles wide.

This land is Brobdingnag and it was in inhabited by BROBDINGNAGIANS. This wonderfully satisfying word to roll over the tongue is now used to mark tremendous size.

Tom’s relationships were continually hampered by the Brobdingnagian proportions of both his ego and his sexual appetite.

To build further on the word Brobdingnagian, when you use the word it is best to give subtle context of the original fictional source.

To this end try and use it to refer to a place or person.

I watched him lean down toward the ground and thought, basketball rather than lawn bowling might better suit his Brobdingnagian frame.

My SECOND amazing Gulliver word is:

We all know that this word was made famous in 1994 when, "Jerry and David's Guide to the World Wide Web" (a website directory of other websites) was renamed "Yahoo!"

However, that Yahoo was actually an anagram for “Yet Another Hierarchical Officious Oracle”.

The word Yahoo means a rude, noisy or violent person, a member of a race of brutes in Swift's Gulliver's Travel's who have the form and all the vices of man. It is synonymous with rednecks, louts or oafs.

It can also have feel good meaning, expressing great joy or excitement.

Jonathan swift also coined some other popular words like:

He first used the term modernism to a Mr. Pope:

"The corruption of English by those Scribblers who send us over their trash in Prose and Verse, with abominable curtailings (sic) and quaint modernisms."

Modernism, as Swift coined the term, refers to "a usage, mode of expression, peculiarity of style, etc., characteristic of modern times," says the Online English Dictionary.

It is now mostly associated with any innovative or distinctively modern feature.

The modernism of the car engine is removing the (amateur) owner-tinkering more prevalent with the engine of the 70’s an 80‘s.

"The title of this chapter, a Truism."

A truism is a self-evident truth, more commonly known as a cliche.