A Quick 5 Point Novel Guide to WHOM vs. WHO 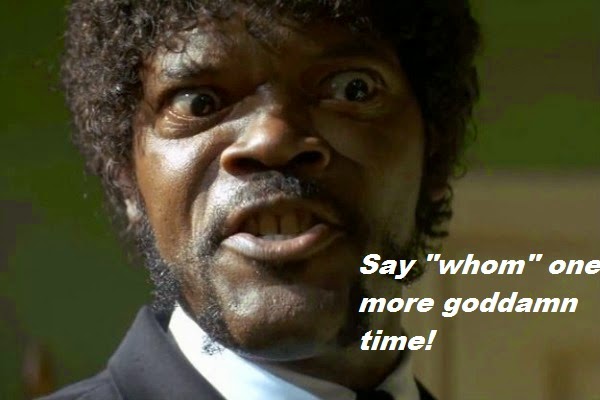 A great deal has been written about the use of WHO vs. WHOM, most of which revolves around the incorrect use of WHOM.

If you correctly say WHOM people can think it snobbish or even superior, regardless of it being correct; however, if you use WHOM incorrectly you can sound superior and stupid.


As it is common for people not to know the correct usage of the word WHOM, it is usually forgivable to use WHO incorrectly…usually! If you work in advertising or anywhere where your incorrect use of grammar can affect you negatively, it is important to get this right.

It is easy to work out whether to use WHO or WHOM once you know the subject and object of a sentence.

Here is my Quick 5 Point Novel Guide to WHOM vs. WHO.

Subject, Verb, Object: the basis of every sentence (or clause). Okay, some say it is over simplification, but it is a very good rule to remember as most day-to-day sentences are relatively simple (writing is simple, but it ain’t easy!)

Sam punched Bill.
Sam is the subject,
Punched is the verb
Bill is the object.

A passive sentence can make it more difficult to see the subject vs. the object of the sentence.

2. WHO is referring to the Subject (in SVO)

The understanding of SVO is important because WHO is referring to the subject.

Example:
Sam punched Bill.
Sam is doing the punching, and so Sam is the subject and the WHO
Who (Sam) punched Bill?

3. WHOM is referring to the Object (in SVO)

The WHOM is referring to the object.

Example:
Sam punched Bill.
Bill is being punched and so Bill is the object and the WHOM.
Whom (Bill) did Sam punch?

4. Be careful of two sentences.

Another method is the He & Him method,