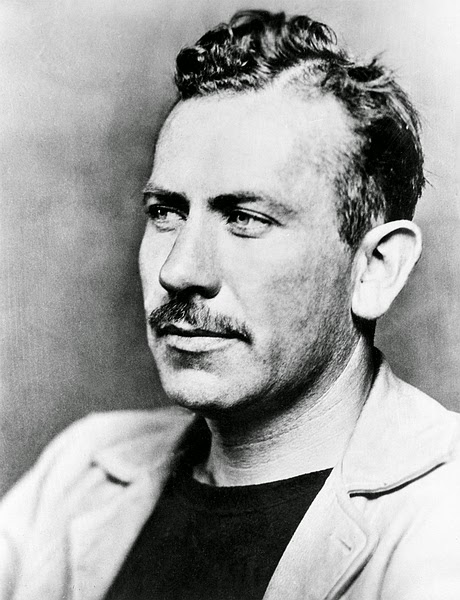 I love writing dialogue. There are lots of blogs on the technical aspect of dialogue; I want to discuss the foundational essence of dialogue.

One of the greatest writers of dialogue has to be John Steinbeck, the Pulitzer prize winner. Here is an extract from one of my favorite books, Of Mice and Men:

'I forgot,' Lennie said softly. 'I tried not to forget. Honest to God I did, George.'
'O.K.—O.K. I’ll tell ya again. I ain’t got nothing to do. Might jus’ as well spen’ all my time tell’n you things and then you forget ‘em, and I tell you again.'
'Tried and tried,' said Lennie, 'but it didn’t do no good. I remember about the rabbits, George.'


'The hell with the rabbits. That’s all you ever can remember is them rabbits. O.K.! Now you listen and this time you got to remember so we don’t get in no trouble. You remember settin’ in that gutter on Howard street and watchin’ that blackboard?'
Lennies’s face broke into a delighted smile. 'Why sure, George, I remember that…but…what’d we do then? I remember some girls come by and you says…you say…'
'The hell with what I says. You remember about us goin’ into Murray and Ready’s, and they give us work cards and bus tickets?'
'Oh, sure, George, I remember that now.' His hands went quickly into his side coat pockets. He said gently, 'George…I ain’t got mine. I musta lost it.' He looked down at the ground in despair.
'You never had none, you crazy bastard. I got both of ‘em here. Think I’d let you carry your own work card?'
Lennie grinned with relief.

For me, there are 10 true drivers of great dialogue.

1. What is the speaker’s motive to have this conversation?
Let’s be honest, we avoid deep conversations unless we really have to, unless we are very motivated. Your characters should be the same. You have to give them a motive strong enough for them to step out of their comfort zone.

3. Are the speakers being openly honest in their dialogue regarding the motives?
Honesty is good…in real life. Make the speakers not honest!

4. Do the speakers want the same thing?
If two people agree then the dialogue is not confrontational. Make them want different things.

6. Separate the characters by level of control
You can have great dialogue when two people of an equal standing but mix up the dynamics of the relationship and you get better contrast in the way they talk, i.e., make one stronger, richer, socially higher, psychotic.

7. Separate their true emotions from the emotions on show in the dialogue.
Ever had your seven year old daughter pour bleach in to the washing machine. You feel like you have just drank ten liters of uber-caffeinated anger-ccinno and it is going to burst forth from every orifice…but…you breathe deeply and tell the distraught child it was an accident and it is okay, “daddy likes the tie dye look”. Use this type of emotional separation.

8. Be subtle
Once you have them hiding their motives and feelings write the dialogue to subtly display this, but so subtle that if you do not know (like the other character) you would never guess.
If writing from a first person point of view, you want the reader to discover the other person’s real motives and emotions some time later and go “oh my god! That dialogue has a completely different meaning in this light.”

9. Be ambiguous
Have answers that are ambiguous and have the other person interpret them how they want to. The best lie, in dialogue, is the truthful lie.

A couple come home to find a large bunch of flowers on the doorstep addressed, “with all my love”, but no names.

“Oh my God! These are beautiful. Who…oh, s-sweetheart did you?” she asks.

“We can’t afford thiss,” she says.

“What? yeah, but you earned them,” Jack says, and heads in to the house.

“More than you know.” She smiles down at the flowers. “I love you...” She smells the roses. “Jack…but not again…okay?”

“Sure,” Jack shouts back from the kitchen.

a) Jack brought them to try and be more romantic, one of his long suffering wife’s complaints (Boring)
b) Jack did not buy them and she knows he didn't, they are from her young lover. (Better)
c) Jack brought them for his lover, but they got delivered to the billing address not the delivery address. The wife thinks they’re from her young lover. (Liking it!)