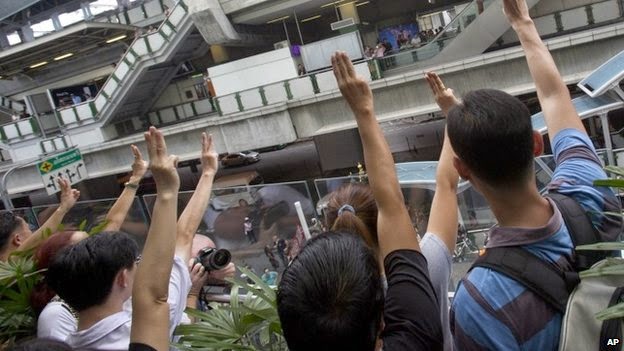 The news this week has been dominated by Ferguson, but if you looked around at some of the other stories, making the news, you will be surprised at how seemingly fictitious situations are happening in the real world.

1. The three finger salute of resistance

In scenes reminiscent of Hunger Games, Thai students were arrested for making the three finder salute in silent dissent against a brutal authoritarian state. It became so popular after the Thai coup that the authorities warned they would arrest anyone in a large group who gave the salute and refused to lower their arm when ordered. Army officials later confirmed that the students were taken to a military camp and were detained for "attitude adjustment", reported The Nation.

Like a story plot from Mission Impossible, the Regin virus was discovered this week, and it has been determined, by looking at the resources needed to produce it, it was probably developed by a Western government. The virus is designed to collect information from computers.
Last year, the Stuxnet virus was developed by US and Israel governments to target and damage Iranian nuclear equipment.

3. Geo-engineering of the climate

Matthew Watson, at the University of Bristol, who led one of the studies in the £5m research programme, said: “We are sleepwalking to a disaster with climate change. Cutting emissions is undoubtedly the thing we should be focusing on but it seems to be failing. Although geoengineering is terrifying to many people, and I include myself in this, [its feasibility and safety] are questions that have to be answered.” In his Mars trilogy Kim Stanley Robinson features humans terraforming Mars. We have messed up the Earth enough to consider the same here.

In a micro cosmic scenario, we are seeing how dangerous an incurable virus with 70% death rate might be. The mini collapse of everyday society: closure of schools, works staying home, medical staff dying in there hundreds, borders closed, neighborhoods quarantined without food. Hundreds of novels have written about viruses (human) from Stephen King’s The Stand to The Pesthouse (Jim Crace) where America is all but destroyed by a plague.

Contemporary slavery refers to the institutions of slavery that continue to exist in the present day. Slavery is a multi-billion dollar industry with estimates of up to $35 billion generated annually. The United Nations estimates that roughly 27 to 30 million individuals are currently caught in the slave trade industry and India has the most slaves of any country, at 14 million (over 1% of the population). A quote by Moises Naim, the acclaimed journalist: "Paradoxically, it may be popular fiction in books and film that stands the highest chance of conveying to the public the complex realities of illicit trade." A great book highlighting this is A crime so Monstrous by E. Benjamin Skinner.

There are 82 countries (including Russia, which does not have a law against homosexual acts but is in the midst of an anti-gay crackdown on the basis of its new law against “gay propaganda.”) with criminal laws against sexual activity by lesbian, gay, bisexual, transgender or intersex people (LGBTIs.) The novel The lies we tell ourselves by Robin Talley, shows the consequences of discrimination and removal of human rights.

Book burning is the practice of destroying books or other written material.  It is usually carried out in public, and is generally motivated by moral, religious, or political objections to the material. Famously, the fire brigade was present in a burning of the book Fifty Shades of Grey, drawling parallels to the book Fahrenheit 451, where the fire brigade is ordered to burn down houses where books are discovered.

Have you seen any other stranger than fiction stories this week?
Posted by Unknown at 6:11 PM